Skip to content
Deirdre Cartwright offers a very personal preview of the new Blow the Fuse season Tomorrow the Moon III
which begins at The Vortex on Wednesday 11 February 2015.
What’s behind a gig?
In our third season of Tomorrow the Moon, we deliberately wanted to put on a greater age range. We were already giving a space to and introducing younger players to our audience, which is very exciting. This time we wanted to also promote older players as well. Looking at the first three gigs in the programme, with Hilary Cameron, Maggie Nichols and Carole Gasser, I realised that I had connections with these musicians that went back to when I first started playing electric guitar in the 1970s.
I met Hilary Cameron when we were both very young musicians in the mid 1970s. I was trying to find out more about jazz and saw that the Jazz Centre Society were putting on a Summer School in London. I didn’t have any money but somehow JCS allowed me to sit in on some of the classes – for free.
As I dragged my HiWatt stack up the stairs to join the guitar class led by Dave Cliff, I learnt something straight away. I needed a small combo!
Later that day I played in Dave Cliff’s performance group. We played Dolphin Dance and Maiden Voyage (pretty challenging). This is where I met Hilary who was the piano player. Years later, playing on a gig, I heard her play piano and sing and I was thrilled by her ability to play and scat sing along on solos. We also had a mutual admiration for Tania Maria.
Maggie Nichols. I remember seeing her name from the front page of Melody Maker in 1973 in a feature about the 50 piece jazz rock group Centipede. We actually met in 1977, I think, at the Womens Monthly Event in Covent Garden. Organised partly by the feminist group I played in at the time ‘Jam Today’, it was a wild, anarchic jam session. Frustrating and exciting, it lasted only a few months. Then Maggie joined a band I was playing in, in the late 1970’s. She asked me to play at an actual jazz gig with actual jazz musicians including pianist Pete Nu. This is when I discovered that a jazz blues could be ‘God Bless the Child’ not quite the same as a 12 bar blues in terms of improvising. As I struggled through the key changes, Maggie was in her element and could  totally be herself using the words of Billie Holiday.
Carole Gasser (nee McBean). In May 1976 I had to make a very difficult choice. Was I going to take my end of year Economics exam or play on a recording session in Manchester with the Ivy Benson Big Band? My first professional studio session. Both on the same day, what a clash!
I remember closing the enormous Economics book and saying to my Mum I have to play on that session. End of my degree course at the Polytechnic of Central London after just one year.
At Strawberry Studios I met most of the band for the first time. I was nearly sick with fright.
Kathy Stobart was there on baritone, my sister Bernice was Ivy’s bass player. However, the person that created a buzz in the studio was Carol MacBean. No longer with the band, she had been Ivy’s tenor player for several years.
As some of the horn section steadily got through several carrier bags of beers, they warmed up and despite no prior rehearsal with this particular line up, there was some great playing. I can still recall what a great sound Carol had and she could really improvise. We needed one more number to complete the album at the end of a marathon day. Ivy called ‘The Pink Panther’. Carol, despite being a bit worse for wear by this point stood up and played the theme beautifully with a couple of great bluesy breaks.
Want to hear it?
Here it is from 1976. I had to record my own copy of the album in the living room, so a bit analogue!
I often wondered what happened to Carol McBean? Never heard of her again. Then last year there was a big Ivy Benson Band reunion in Bristol. One of the old band mentioned that Carol McBean had played in the Reunion Quartet set. Her married name is Carol Gasser and she still plays regularly in Cornwall. Not only that but gigs regularly with Claudia Colmer – this was Ivy’s legendary double bass player from the 1960s, who also lives in Cornwall.
I happened to be playing with ARQ in St Austell in November and managed to hook up with both of them. It was great meeting them and I managed to persuade them to come up to London, the first time in over 35 years for Claudia, to play at the Vortex as part of the Tomorrow the Moon season. 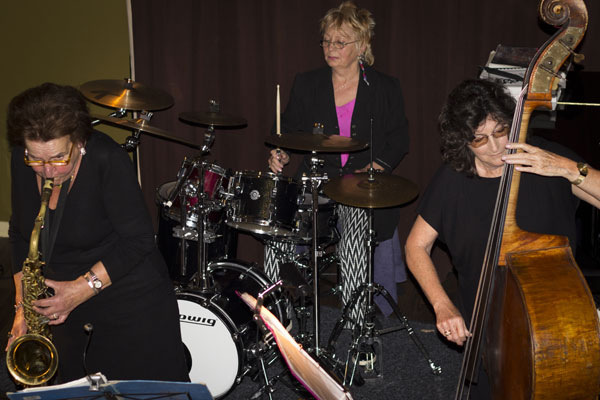