Blow the Fuse presents  ‘Tomorrow the Moon’ 2020, featuring the Michele Drees Jazz Tap Project, back after a sold out gig last year.

Michele Drees Jazz Tap Project is a spectacular mix of rhythm tap dance with Jazz and Latin music. Taking its roots from the iconic ‘Jazz Tap’ that originated in Harlem, which then became popularised on Hollywood’s silver screen, MDJTP features some of the most talented tap dancers and musicians from across the UK and international rhythm tap scene.

“Fusing drumming with some pretty fancy footwork, drummer Michele Drees is at the forefront of a revolutionary new style of entertainment”
Andy Hughes Drummer magazine

“Rhythm Tap and Drumming are the things that set my soul on fire…they are from the same family. Using Rhythm as my starting point, I incorporate tap as a percussion instrument in my compositions. This deep rooted connection between drums and tap is the area I am pushing and exploring through this project.” Michele Drees

PLUS Roz Harding / Billie Bottle are BREATH OF GREAT LIFE. 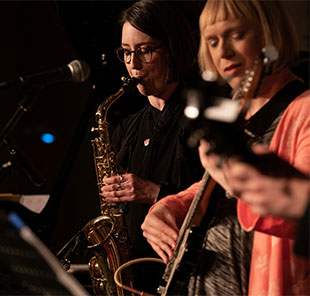 Multi-instrumentalist Billie Bottle and alto saxophonist Roz Harding are charismatic and exceptional musicians and performers.. Torn between a whisper and a squall; the duo stitch together free improvisation, abstracted covers and first-hand compositions.

Based in Devon, since 2012 they have played together in various bands for Kate and Mike Westbrook, Billie Bottle & The Multiple and A Quiet Night In. These projects have been the cornerstones of a joint approach, which was cemented upon discovering a mutual allegiance to Manic Street Preachers’ masterpiece ‘The Holy Bible’.

Billie Bottle, has a background in folk, rock, jazz, circus and theatre. Her love of the Canterbury Sound has led her to work with Caravan’s Dave Sinclair and Robert Wyatt. With The Multiple, her last album, Unrecorded Beam, made settings of nature poetry by Thoreau; her forthcoming one, The Other Place, is innovative and political.

Roz Harding’s influences include Kate Bush, Bob Dylan, Art Pepper, Jeff Buckley, Prince and Jackie McLean. Roz’s debut album SUPERMOOD, feat. Mike Outram and Jim Bashford, is an expression of her experience with Alexander Technique. In 2019 Roz realised how much she loves the sound of air and is digging deep into the saxophone air-space.

Between them, Billie and Roz have played Ronnie Scotts, London Jazz Festival, The Jazz Cafe, King’s Place, Camden People’s Theatre, Teatro Rossini and Halle Women in Jazz Festival. They have had their music played on Jazz FM and BBC 6 Music, won best Jazz Act 2014 (South West Music Awards) and have played live on air for BBC Radio 3 (Late Junction and In Tune) and BBC Radio 4.

Billie Bottle: “vigorous and unequivocally hip” – All About Jazz