What a month we’ve had, talk about the 73 bus! Last week, ARQ won ‘Jazz Ensemble of the Year’ in the 2018 Parliamentary Jazz Awards and now ARQ is the ‘People’s choice’ in Best Small Group in the 2018 British Jazz Awards! In the same awards, Alison came runner up in the Double Bass player of the year category, Alexandra Ridout, who we featured last year in our Tomorrow the Moon series, was Rising Star and Winston Clifford was Jazz Drummer of the year. Thank you to all those who voted for us! We’re sooooo proud and you can join in the celebrations THIS Thursday at the Vortex… And in the meantime, read Alison’s new interview/feature in London Jazz News: HERE 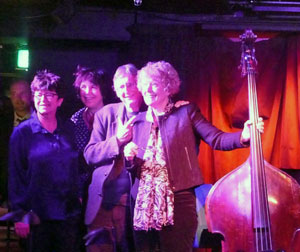 2018 has been a great year for the band, with UK festivals and club dates, a great tour of Germany in September – and now winning ‘Jazz Ensemble of the Year’ in the prestigious 2018 All-Party Parliamentary Jazz Awards.

Come along to the Vortex to celebrate with us! Tickets on sale now! BOOK while you can still get a table.

‘Inventive, vibrantly colourful and unfailingly melodic, possessed of a strong sense of narrative and cinematic quality, frequently inspired by personal experiences’ (the jazzman.com)

And coming up in December…

BUY TICKETS HERE for the ELECTRIC LANDLADIES CHRISTMAS party of the season!

A great and groovy night with anthems from the Pretenders & Eurythmics, Beyonce and Stevie Wonder, rock out to Janis Joplin and Free, throw in some disco from the Trammps and Chic and classic 60s soul… it’s going to be a brilliant party!

The Boston Music Room is directly opposite Tufnell Park tube station, lots of good places to eat round there – and there’s a reduced price for advance tickets too.