Described by LondonJazzNews as ‘a celebration of life itself’ their music is ‘inventive, vibrantly colourful and unfailingly melodic, possessed of a strong sense of narrative and cinematic quality, frequently inspired by personal experiences’ (the jazzmann.com).

Their combination of richly nuanced compositions with folk-infused grooves, skilful musicianship and a love of improvisation, creates a compelling and coherent whole. ARQ play ‘songs without words’ and are known for their vibrant, communicative performances.

2018 was a great year for ARQ, with UK festival and club dates, successful tours of Germany and Scotland and then Winners of ‘Ensemble of the Year’ in the prestigious 2018 All-Party Parliamentary Jazz Awards.

ARQ’s profile has risen dramatically over the past five years, with extensive touring and critical acclaim for their two albums ‘August’ (2014) and ‘A Magic Life’ (2016). They have built a substantial and wide-ranging audience, receiving national and international radio play and four and five-star reviews in jazz and national press. Their 40-date ‘A Magic Life’ UK tour 2016-17 was supported by Arts Council England.

‘Inspired by real-world ideas, people and situations but infused with the kind of heady imagination that transforms their resonances into a series of vivacious musical adventures’ ★★★★★ BBC Music Magazine

‘Unified musical dexterity, not a note wasted and with sound as story — clear and undisguised, deeply affecting and unashamedly open’ The Morning Star

‘A gorgeous album synthesising mood, melody and the interplay between musicians totally at home with each other’ ★★★★ Jazzwise

‘If the first rule of life is to do what makes you happy… this album tumbles and flows with such a spirit, performed by a quintet whose musicality and heart enables it; a celebration of life itself‘ LondonJazzNews

‘Spirited, eloquent and graceful’ ★★★ The Guardian
‘Full of energy, wonderful melodies, grooving rhythms and a musical togetherness that make it a true celebration’ Melodiva, Hamburg

‘The playing, both individually and collectively was superb throughout and Rayner’s bass playing was always at the heart of the music… in many ways the quintet IS her instrument. Rayner’s late blooming into a composer of some stature is one of the most satisfying stories of British jazz in recent years’ thejazzmann.com

In ARQ, Alison Rayner has gathered a group of fine musicians who sympathetically support her music: Steve Lodder on piano, Deirdre Cartwright on guitar, Diane McLoughlin on saxophones and Buster Birch on drums. The group’s imaginative and assured playing are superbly suited to Rayner’s compositions and reflect a confidence inspired by working intensively together.

“In a Jazz age with an abundance of technical excellence – and ARQ have it in great quantity – we look for something else as well. ARQ bring to the stage a musical bond that is expressed in such fun and joyful moments that it is a pleasure to be in the room with them. Jazz of the highest quality.”  Phil Rose, Birmingham Jazz

A Magic Life is bursting with melodic and harmonic references from jazz, classical and folk musics. Rhythmic grooves and great solos abound. Rayner cites both Charlie Haden and Eberhard Weber as influences – but there is always a strong sense of Rayner’s musical personality evident in the poignant folk-inspired melodies, rootsy grooves and improvisational invention.

‘I was inspired to call the album A Magic Life because of two recent incidents. The loss of a friend last year, who wrote in her own epitaph about how magic her life had been; then a chance encounter with a young boy, who asked me “Is music stronger than magic?” I replied that to me, music is a merging of magic and logic. These events set me on a course of thinking about connections between memory, mortality, magic – and music.’

Described by the Guardian as ‘spirited, eloquent and graceful’ and by the Observer as‘a beautifully integrated band’, their music is inventive, vibrantly colourful and unfailingly melodic, possessed of a strong sense of narrative and cinematic quality. Their combination of richly nuanced compositions – frequently inspired by personal experience – with folk-infused grooves, skilful musicianship and a love of improvisation, creates a compelling and coherent whole.

“A master-class in empathetic playing with superb solos and a rhythm section of the highest calibre. Don’t miss these virtuoso musicians when they come to town.” Phil Webb, Restormel Arts, Cornwall

They have built a substantial and wide-ranging audience, receiving national and international radio play and four and five star reviews in jazz and national press. Their recent 35-date ‘A Magic Life’ UK tour, supported by Arts Council of England, concluded with a sell-out night at the Soho Pizza Express Jazz Club.

ARQ will be playing Festivals including Swanage and Brecon this Summer, touring in Germany in September and in Scotland in November. 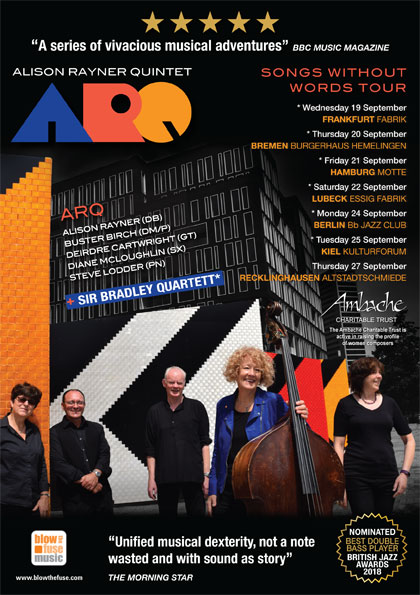 ‘Inspired by real-world ideas, people and situations but infused with the kind of heady imagination that transforms their resonances into a series of vivacious musical adventures’ ***** BBC Music Magazine

‘A gorgeous album synthesising mood, melody and the interplay between musicians totally at home with each other.’ **** Jazzwise

‘A celebration of life itself ‘ LondonJazzNews

Their first album ‘August’ was released in July 2014.

“August could hardly represent a sharper reminder to the British jazz world of the breadth and depth of Alison Rayner’s often unsung talents. It’s taken a while for Alison Rayner the composer to step all the way out of the shadows. But on the strength of this fine album, she might have to get used to the spotlight”. 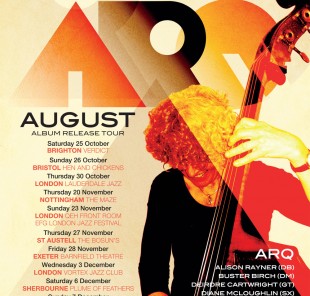 “The group’s tight and assured playing are superbly suited to play Rayner’s compositions, her thoughtful and melodic soloing being a particular highlight. The debut album couldn’t be stronger”

“Deliciously upbeat, groovy and thoughtful jazz…the recent album August shows her to be a superb composer to boot… a perfect showcase of Rayner’s diverse talents”